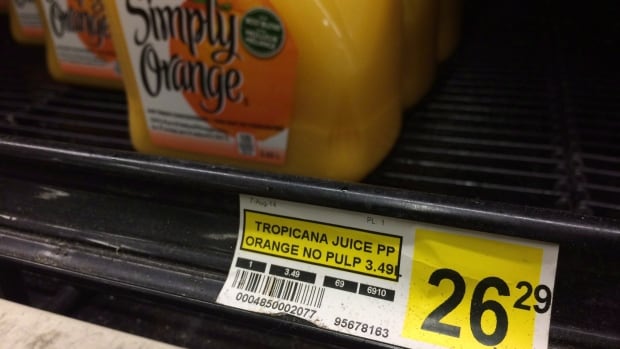 A price tag lists the price of a jug of orange juice at a grocery store in Iqaluit, Nunavut on December 8, 2014. The federal government annnounced in July that retailers would have to spell out on receipts how much consumers were saving due to the Nutrition North food subsidy, but a University of Toronto professor says that the change hasn’t made the much-maligned subsidy more transparent or effective. (Sean Kilpatrick/Canadian Press)

A professor studying the effectiveness of the Nutrition North program says showing consumers how much they’re saving on receipts is not increasing accountability or transparency of the food subsidy for Northern and remote communities.

In July, the federal government announced that retailers under the program have until April of 2016 to put a “point-of-sale” system in place, which will spell out, on their receipts, how much customers are saving because of the subsidy.

The change was introduced following a 2014 Auditor General’s report looking into the $60 million program, which found that the federal government did not know whether retailers in the North are passing on the savings to consumers.

Tracey Galloway’s studies at the University of Toronto focus on chronic disease in Northern Canada. She spoke with CBC North’s The Trailbreaker about what she found when she looked into the food subsidy.

‘We can’t tell if the amount that the federal government is paying for subsidies to retailers actually represents the true costs of shipping goods north,’ says professor Tracey Galloway, of the University of Toronto. (Twitter)

The following interview has been edited and condensed.

It does not represent an increase in transparency and accountability. What it does do is let [customers] know on their grocery receipts exactly what level of subsidy is available per kilogram of food sold to them in their home community. But that information was previously available on the Nutrition North website. It may have been more difficult for them to find — and it’s easier for them to find on their grocery receipts — but it’s not new information, so there’s really no greater transparency or accountability now.

What information needs to be passed on to consumers to indicate clearly if they’re benefiting from the subsidy or not?

What we’d really like to see is whether or not the subsidy that’s paid to the retailer in each community actually represents how much it costs to ship food north to that community. So the subsidy levels as they currently stand were determined based on 2010 information, they have not changed since that time. What we see, and what the Auditor General saw in his 2014 report, is that there’s no criteria in the system for the retailers to share information on what their actual freight costs are. So we can’t tell if the amount that the federal government is paying for subsidies to retailers actually represents the true costs of shipping goods north.

Do you have any information about shipping costs?

We don’t really. We only have access to publicly available information about freight costs. But the retailers make their own freight arrangements. And most retailers in the North have fairly long-term contracts with air freight providers and the terms of those contracts are not disclosed to the public or to Indigenous Affairs, so there’s really no way to evaluate whether or not the level of the subsidy we’re paying to the retailers for their freight is actually offsetting the true costs of shipping freight north.

What needs to be on consumers’ receipts?

I think that the grocery receipts themselves probably could not hold the information that we really need to assess how retailers make up food prices. Retailers don’t have to disclose to us what their wholesale costs are, where they purchase the food, how that varies seasonally, weekly, monthly — that information is not disclosed, and nor are the actual freight costs they bear in shipping food north. We really don’t have any system for monitoring how they calculate the prices for consumers in communities.

How would the Nutrition North system need to work to get more nutritious and affordable food to northern communities?

Nutrition North is a retail subsidy. It’s a market-driven subsidy. It’s based on the idea that if we offset the cost of freights that retailers pay, that retailers will compete with each other, and the retailer who’s offering the best food at the lowest price in communities will be the one that consumers turn to. That market-driven model can be effective, but it’s questionable whether or not it can be effective in remote, northern communities where there’s not a significant degree of competition. Most northern customers have only one or two stores in their community. So a market-driven model simply can’t serve them by allowing retailers to compete based on price.

Price surveys conducted by organizations such as the Nunavut Bureau of Statistics show us that prices have not gone down under the new subsidy, they continue to be high, much higher than they are in the South. So if we’re not offsetting the cost of freight and having that result in lower food prices for northerners, what’s the purpose of the subsidy?

Why have you taken this issue on?

My own research program looks at chronic disease risk in northern communities and we’ve found consistently that people’s experience of diseases such as diabetes, stroke, heart disease, cancer, are all deeply affected by the availability and the affordability of food. And other researchers find that too, people working in mental health and suicide prevention, find that being able to have access to affordable food is a primary determinant of people’s health and well-being. I think if we can get this right, if we can get food costs down, then we can really have a significant impact on improving the health of people who live in the North.